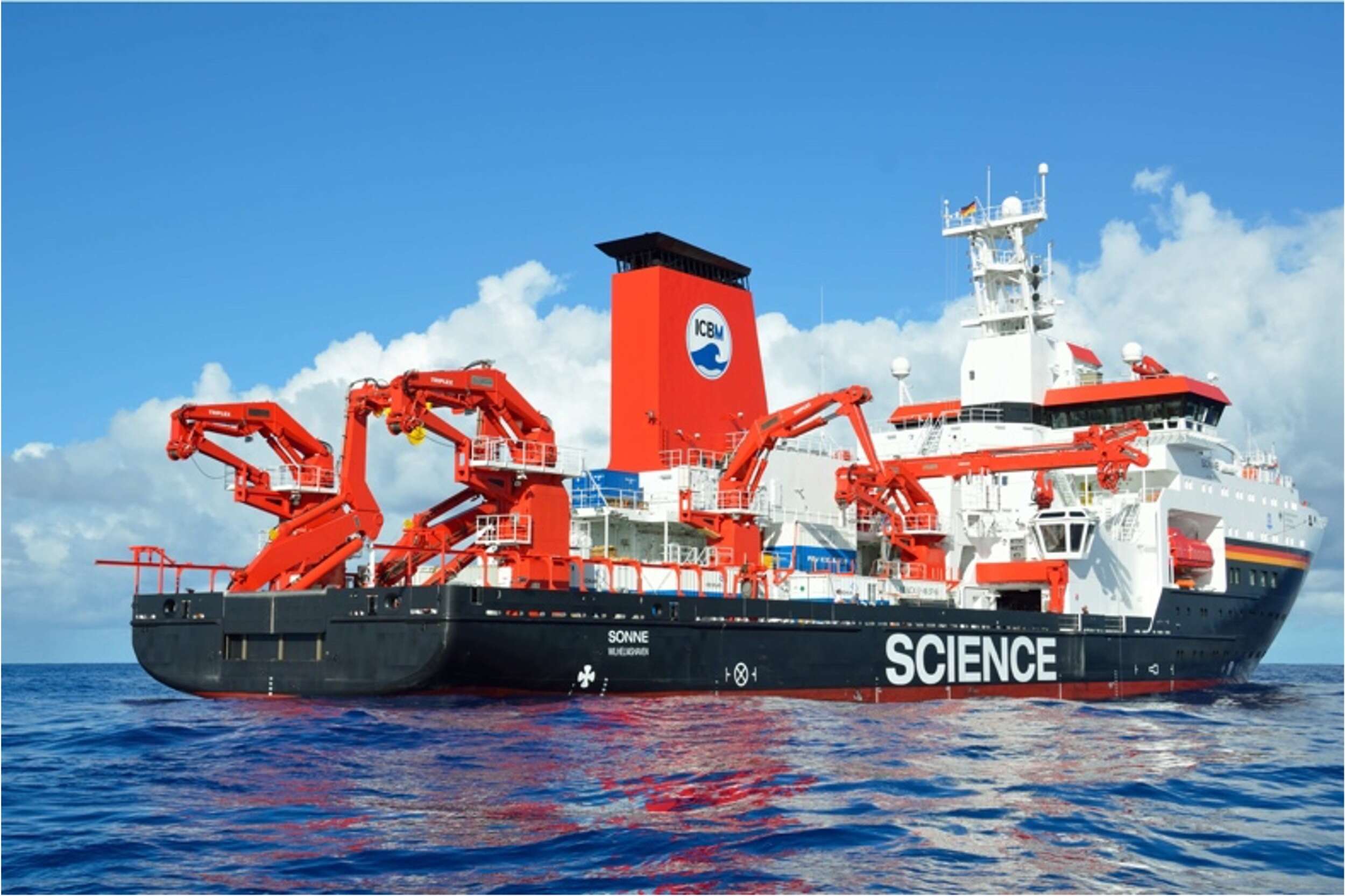 The MiningImpact Project returns to investigate the environmental effects of polymetallic nodule mining on the abyssal seabed 1.5 years after technology trial

Pacific Ocean, 18 November 2022:  Scientists are returning to the sites where seafloor nodule collector technology trials occurred 1.5 years prior.  The purpose is to continue independent environmental monitoring of a deep-seabed mining trial conducted in the Clarion Clipperton Zone (CCZ) of the Pacific Ocean in April and May 2021

Since 2018, GSR has been collaborating with the European research project MiningImpact [1], involving scientists from 29 European institutes and 8 countries to help understand the environmental effects of collecting mineral resources from the seafloor.  The MiningImpact consortia of scientists independently monitored GSR’s collector technology trial from a separate vessel.  GSR also collaborated with, among others, the Massachusetts Institute of Technology (MIT) who were aboard the GSR-chartered vessel, specifically to monitor sediment plumes.

Environmental monitoring during and immediately after the 2021 trial showed that 3 to 8 cm of sediment was removed from the seafloor along with the nodules and the initial form of the sediment plume was a low-lying turbidity current. Researchers from MIT found that for the test areas studied, 92-98% of the sediment was deposited locally or was in suspension below 2 m altitude, with suspended sediment concentrations on the order of a few mg/l [2]. Noise studies by MiningImpact showed that the collector created a low-frequency noise (<10 Hz) that dissipated within 400 m of the test site.

Now, MiningImpact researchers return to investigate the longer-term effects of collecting nodules from the seafloor.  Kris van Nijen, Managing Director of GSR said: “Independent scientific research into the environmental effects of deep seabed mining is essential for good decision-making and well-informed regulation.  Deep-seabed mining may represent one of the more responsible ways to source metals. Without continued research we will never know the answer.  GSR will only apply for a mining contract if the science shows that, from an environmental and social perspective, the seabed can be a responsible source of the primary metals needed for population growth, urbanisation and clean energy transition.”

During the trial, GSR tested its pre-prototype seafloor nodule collector, Patania II, a 25-ton robot on caterpillar tracks. Patania II was equipped with the latest cameras and sensors, including environmental sensors. The robot was controlled from a surface vessel via a 5 km-long umbilical that provides power and communication capabilities. The trial confirmed the trafficability and manoeuvrability of Patania II and its ability to pick up nodules.  Following the successful trial, GSR is now working on the design a full-scale nodule collector with a riser and lift system to bring the nodules to a surface vessel during a system integration test.

Environmental monitoring is a key component of GSR’s development program, ensuring the effects of its activities are understood, can be accurately predicted and improved upon and can lead to the development and implementation of appropriate environmental management strategies. GSR acknowledges that before any deep seabed mining occurs, it needs to be clearly demonstrated that such activities can be managed in a way that ensures the effective protection of the marine environment.  Deep seabed mining is an industry in the exploration, research and development phase. Years of detailed scientific work lie ahead before there is any prospect of commercial activity.

Never before has so much thought gone into regulating an industry before it even exists. No State or entity can commercially explore the seabed or collect nodules except under contract with the International Seabed Authority (ISA). The ISA, established in 1994, is mandated through the UN Convention on the Law of the Sea (UNCLOS) to organize, regulate and control all mineral-related activities in the international seabed area and for the benefit of humankind as a whole. To date, the ISA has awarded 17 exploration contracts in the CCZ. The contractors who hold these 15-year licenses represent nations including China, Japan, Russia, France, UK, Korea, Germany, Poland, Cook Islands, Nauru and Belgium. All exploration contract holders are undertaking geological and environmental studies as part of their contractual obligations. The ISA is in the process of developing regulations for commercial activity and any contractors wishing to undertake mining operations in the international deep seabed area will need to abide by these strict regulations. The regulations incorporate specific provisions to ensure the effective protection of the marine environment and conservation of marine biodiversity, human health and safety, and a system of payments which aims to ensure the equitable sharing of financial and other economic benefits derived from seabed minerals. The regulations must be agreed and adopted by the ISA Council and approved by the ISA Assembly, comprised of 167 Member States and the European Union.

Trillions of rock-like accretions called polymetallic nodules lie at a water depth of between 4,000 and 6,000 metres on the seafloor of the CCZ. Since the early 1970s, there has been growing interest in collecting these nodules due the high-grade and multiple metals they contain – metals like nickel, cobalt, manganese, and copper. The metals found in polymetallic nodules are critical for clean energy technologies and urban infrastructure. In the long-term, a circular economy in metals is achievable but all credible studies [3] indicate that enormous quantities of primary resource will be required first. Land-based reserves will not be able to meet demand, while recycling will only make a modest contribution because of long in-use lifetimes, among other factors. Compared with the alternative, which is to rely exclusively on current and new land-based mines, the deep sea may present a more responsible way of sourcing the metals the planet needs for decarbonisation and sustainable economic development.   Seabed minerals could diversify metal supplies and it could provide an option that does not involve deforestation, relocation of peoples, child labour and mountains of waste.

Trials of GSR’s Patania II pre-prototype nodule collector took place in the Belgian and German contract areas of the CCZ in March to April 2021. The studies being conducted by independent scientists in the MiningImpact consortium will not only address the direct effects of collecting polymetallic nodules, but also those of the sediment plume created by the process. The data will provide information on ecosystem effects of potential future mining that cannot be drawn from the small-scale experiments conducted in the past. By employing state-of-the-art scientific equipment researchers will be able to determine the spread of the sediment plume and how it resettles. They will also be able to survey the loss of biodiversity across different faunal classes. Among the specialized instruments deployed, there were two remotely operated vehicles (ROV), an autonomous underwater vehicle (AUV), in situ oxygen profilers and experiment chambers, in situ pumps, as well as 50 inter-calibrated hydro-acoustic and optical sensors for measuring the suspended sediment concentrations and particle sizes.

[1] 29 institutions from nine European countries, plus the International Seabed Authority, are partners in MiningImpact.