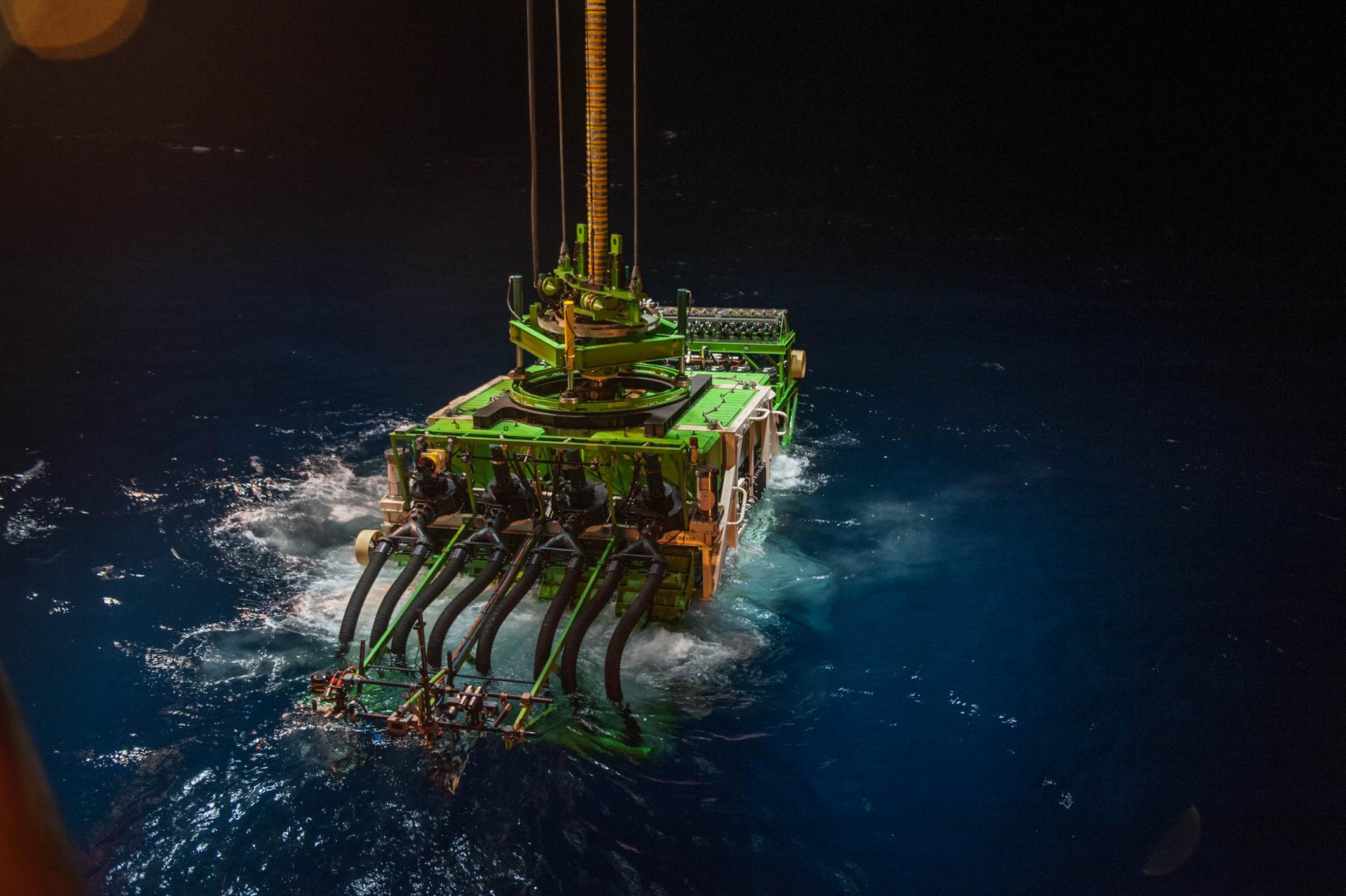 Latest News
Antwerp, 20 May:  The engineering trial of an ultra deepwater nodule collecting robot has successfully concluded last week after almost six weeks of testing and environmental monitoring in the Pacific Ocean. Patania II, a pre-prototype polymetallic nodule collector developed by Global Sea Mineral Resources (GSR), was trialled at a water depth of 4,500 metres in the Clarion Clipperton Zone (CCZ) between Hawaii and Mexico. Not only is this a major engineering achievement, it could also pave the way for delivering clean energy minerals with lower environmental and social impacts than many of the alternatives.  Polymetallic nodules are rich in metals critical for clean energy technologies, including nickel, cobalt, copper and manganese. Patania II was deployed in the GSR (Belgian) and BGR (German) contract areas of the CCZ between 10 April and 9 May. The robot successfully demonstrated its ability to drive and maneuver on the deep seabed and collect nodules. The mission overlaps with a four-year independent transnational scientific research project called MiningImpact.  Independent environmental monitoring was conducted by MiningImpact scientists from a separate vessel during the trial, with a focus on monitoring the far-field sediment plume. Patania II is about one third the scale of a commercial robot but the collector head is full scale, meaning the results of this trial will give an accurate indication of the effects of commercial-scale nodule collection. Scientists on board the GSR vessel were able to forecast and track the near-field sediment plume behaviour.  Initial findings look promising, although analyses are ongoing, and final results will be made public in due course. “The first results suggest that the sediment remains largely in the vicinity of the mining area,” said Kris Van Nijen, Managing Director of GSR. “Further analysis will be conducted in the coming months and years. “These in-situ tests are part of our precautionary, step-by-step approach towards demonstrating that deep seabed nodule collection can be considered a responsible way to source the metals required for clean energy transition and sustainable development. The data collected will allow us to calibrate our computer models and improve our design and operations even further.” About MiningImpact 29 institutions from nine European countries, plus the International Seabed Authority, are partners in MiningImpact. Twenty three scientists from eight of these institutions were on board the vessel monitoring the Patania II trial. The aim of the project is to develop a sound scientific basis for the analysis and modelling of mining-related environmental effects in the deep sea. The monitoring evaluates the drifting and settling of the sediment plume created by the nodule collector, the effects on fauna, biogeochemical fluxes and processes, changes in microbial turnover rates and functions, in situ ecotoxicology, the release of trace metals from the suspension plume and noise emissions from the collector. The effects of sediment re-deposition on organisms living on and in the soil will also be investigated. State-of-the-art equipment used to monitor the environmental effects of the trial included two remotely operated diving robots (ROV), an autonomous underwater vehicle (AUV), in situ oxygen sensors, incubation chambers and pumps as well as 50 intercalibrated hydroacoustic and optical sensors to measure sediment concentration in the water column. About GSR GSR is the deep-sea exploratory division of the DEME Group, a world leader in marine engineering, dredging, and environmental remediation. Using its 140 years of know-how, DEME is helping to address many of the most pressing global challenges, including climate change, rising sea levels, and the transition to renewable energy. DEME’s investment in seabed mineral exploration – through GSR – is part of the Group’s long-term commitment to this vision.
We use cookies on our website to give you the most relevant experience by remembering your preferences and repeat visits. By clicking “Accept All”, you consent to the use of ALL the cookies. However, you may visit "Cookie Settings" to provide a controlled consent.
Cookie SettingsAccept All
Manage consent